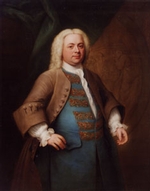 Friedrich Wilhelm Zachow or Zachau (14 November 1663, Leipzig – 7 August 1712, Halle) was a German musician and composer of vocal and keyboard music.


Life
Zachow probably received his training from his father, the piper Heinrich Zachow, one of Leipzig's town musicians in the Alta capella, and maybe from Johann Schelle, a leading German composer, when the family moved to Eilenburg.[1] As Kantor and organist of Halle's Market Church in 1684 he succeeded Samuel Ebart. During his time at Halle he became particularly renowned as a composer of dramatic cantatas. In 1695 he was criticized by the pietists because of his excessive long and elaborate music, that could be only appreciated by cantors and organists.[2] Zachow was influenced by Johann Theile in Merseburg and the poetry of Erdmann Neumeister, pastor in the nearby Weissenfels, and his criticism on pietism.

Zachow was the teacher of Gottfried Kirchhoff, Johann Philipp Krieger and Johann Gotthilf Ziegler,[1] but is best remembered as George Frideric Handel's first music teacher. He taught Handel how to play the violin, organ, harpsichord, and oboe as well as counterpoint. Zachow's teaching was so effective, that in 1702 at the age of seventeen, Handel accepted a position as organist at the former Dom in Halle. It is said that after Zachow died in 1712, Handel became a benefactor to his widow and children in gratitude for his teacher's instruction.[3] In 1713 J.S. Bach was invited as Zachow's successor.

Handel continued to use Zachow's compositions in his own works, not simply quoting, but also in terms of instrumental colour; for example the cantata Herr, wenn ich nur dich habe, which is unique in having a harp solo in the German cantata repertoire, was copied by Handel, taken to London, and may have influenced the instrumentation of Saul and Esther.