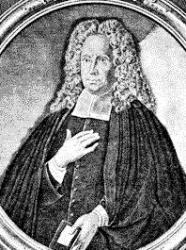 Birth Year: 1670
Death Year: 1739
Freylinghausen, Johann Anastasius, son of Dietrich Freylinghausen, merchant and burgomaster at Gandersheim, Brunswick, was born at Gandersheim, Dec. 2, 1670. He entered the University of Jena at Easter, 1689. Attracted by the preaching of A. H. Francke and J. J. Breithaupt, he removed to Erfurt in 1691, and at Easter, 1692, followed them to Halle. About the end of 1693 he returned to Gandersheim, and employed himself as a private tutor. In 1695 he went to Glaucha as assistant to Francke; and when Francke became pastor of St. Ulrich's, in Halle,1715, Freylinghausen became his colleague, and in the same year married his only daughter. In 1723 he became also sub-director of the Paedagogium and the Orphanage; and after Francke's death in 1727, succeeded him as pastor of St. Ulrich's and director of the Francke Institutions. Under his fostering care these Institutions attained their highest development. From a stroke of paralysis in 1728, and a second in 1730, he recovered in great measure, but a third in 1737 crippled his right side, while the last, in Nov., 1738, left him almost helpless. He died on Feb. 12, 1739, and was buried beside Francke (Koch, vi. 322-334; Allgemine Deutsche Biographie, vii. 370-71; Bode, pp. 69-70; Grote's Introduction, &c.)

Almost all Freylinghausen's hymns appeared in his own hymnbook, which was the standard collection of the Halle school, uniting the best productions of Pietism with a good representation of the older "classical" hymns. This work, which greatly influenced later collections, and was the source from which many editors drew not only the hymns of Pietism, but also the current forms of the earlier hymns (as well as the new "Halle" melodies, a number of which are ascribed to Freylinghausen himself) appeared in two parts, viz.:—
i. Geistreiches Gesang-Buch, den Kern alter und neuer Lieder...in sich haltend &c, Halle. Gedrucktund verlegt im Waysen-Hause, 1704 [Hamburg], with 683 hymns and 173 melodies. To the second edition, 1705 [Rostock University], an Appendix was added with Hymns 684-758, and 21 melodies. Editions 3-18 are practically the same so far as the hymns are concerned, save that in ed. 11, 1719 [Berlin], and later issues, four hymns, written by J. J. Rambach at Freylinghausen's request, replaced four of those in eds. 1-10.
ii. Neues Geistreiches Gesangbuch,&c, Halle . . . 1714 [Berlin], with 815 hymns and 154 melodies. In the 2nd edition, 1719 [Rostock University], Hymns 816-818, with one melody, were added.
In 1741 these two parts were combined by G. A. Francke, seven hymns being added, all but one taken from the first edition, 1718, of the so-called Auszug, which was compiled for congregational use mainly from the original two parts: and this reached a second, and last, edition in 1771. So far as the melodies are concerned, the edition of 1771 is the most complete, containing some 600 to 1582 hymns. (Further details of these editions in the Blätter für Hymnologie, 1883, pp. 44-46, 106-109; 1885, pp. 13-14.) A little volume of notes on the hymns and hymnwriters of the 1771 edition, compiled by J. H. Grischow and completed by J. G. Kirchner, and occasionally referred to in these pages, appeared as Kurzgefasste Nachricht von ältern und ncuern Liederverfassern at Halle, 1771.

As a hymnwriter Freylinghausen ranks not only as the best of the Pietistic school, but as the first among his contemporaries. His finest productions are distinguished by a sound and robust piety, warmth of feeling depth of Christian experience, scripturalness, clearness and variety of style, which gained for them wide acceptance, and have kept them still in popular use. A complete edition of his 44 hymns, with a biographical introduction by Ludwig Grote, appeared as his Geistliche Lieder, at Halle, 1855. A number of them, including No. v., are said to have been written during severe attacks of toothache. Two (“Auf, auf, weil der Tag erschienen"; "Der Tag ist hin") are noted un