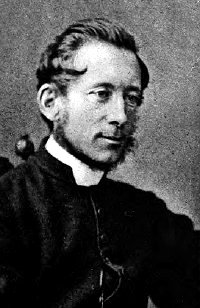 By the age of 10, he was the assistant organist at St John's Church in Myton, Hull (transferred to Drypool in 1917), where his paternal grandfather was vicar. He learned the violin and the piano. He studied at Wakefield and St. Catharine's College, Cambridge, earning a BA in Classics in 1847. He cofounded the Cambridge University Musical Society. He was ordained as curate of Malton in 1847. For a short time, he was canon of Durham Cathedral, then precentor (1849 – 1862). In 1862 he became vicar of St. Oswald's, Durham, until his death in 1876.

Dykes resolutely upheld the high church tradition, to the consternation of his bishop, and was something of a renegade figure in the Victorian Church.He was a member of the Society of the Holy Cross. He died in Sussex at age 52, and is buried at St. Oswald’s, Durham.

Influential in hymnody in his time, Dykes's impact has declined in recent times. Hymns Ancient and Modern Revised (1950) carried 31 of his tunes, the New Standard edition of the same hymn book (1983) used only 15.